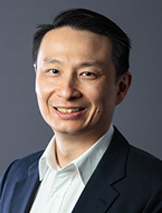 Vincent Tang is the principal deputy director for the NIF & Photon Science (NIF&PS) Directorate at LLNL and is acting program director for the NIF&PS High Energy Density and Photon Systems organization. In these roles, Tang supports the execution and sustainment of NIF&PS missions and workforce, and the integration of NIF&PS photonic source development efforts with LLNL’s experimental HED expertise to create new capabilities for HED science and applications.

Tang began his career at LLNL in 2006, leading and developing multiple efforts in compact accelerators, pulsed-plasma radiation sources, and associated national security applications. During 2013 to 2019, he was a program manager at the Defense Advanced Research Projects Agency (DARPA), where he created and led the agency’s Countering Weapons of Mass Destruction initiative, SIGMA and SIGMA+. He also created and led DARPA’s Intense and Compact Neutron Sources program as well as the Accelerated Computation for Efficient Scientific Simulation program. He was named DARPA’s Program Manager of the Year in 2016, was a finalist for the 2017 Samuel J. Heyman Service to America Medal, and was awarded DARPA’s Superior Public Service Medal in 2019.

Tang returned to LLNL in 2019 as the division leader for the Laser Systems Engineering and Operations division in the Engineering Directorate. He also served as the NIF&PS MagNIF Integrated Product Team lead, helping to develop and operationalize magnetic-field capability for NIF targets as a disruptive path to ignition and for other national security needs.

Tang earned a dual B.S. degree in nuclear and chemical engineering from the University of California, Berkeley, and an S.M. in nuclear engineering and a Ph.D. in applied plasma physics from the Massachusetts Institute of Technology.