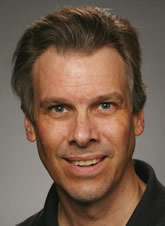 Paul Wegner, co-program director for Laser Science & Technology and Systems Engineering, has more than 30 years of experience developing solid-state inertial confinement fusion laser systems beginning with the Nova laser at LLNL in 1984. In 1998, he joined the NIF project to work on the physics basis and systems engineering of the ultraviolet laser section. He previously served as NIF Optics and Targets manager. Wegner received his B.S. in physics and mathematics from Portland State University in 1984 and his Ph.D. in applied science from the University of California, Davis, in 1995.