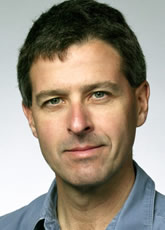 Dr. John Edwards, associate NIF director for inertial confinement fusion (ICF) and high-energy-density (HED) science, has been responsible for defining the direction of ICF and HED experiments on NIF. Dr. Edwards has more than 20 years of experience in laser-driven ICF target physics and laboratory HED physics. He earned his Ph.D. in 1990 from Imperial College in London. During his graduate study, he conducted laser plasma physics experiments and developed an interest in simulation.

Dr. Edwards then joined the UK's Atomic Weapons Research Establishment as a HED experimental designer. He later served as the group leader for HED physics and was responsible for defining research directions. He joined the Weapons and Complex Integration Directorate at LLNL in 1998, and over the next five years, laid much of the foundation for the HED laser program in place today. Dr. Edwards then turned his focus almost entirely to ICF, leading groups in most aspects of the target physics, and later serving as the ignition team leader.