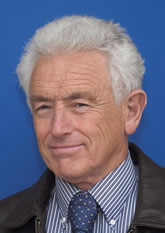 Joe Kilkenny, vice president for high energy density physics at General Atomics, currently is assigned to the NIF diagnostic program as the scientific diagnostic leader. He came to LLNL in 1983 and led the inertial confinement fusion (ICF) program from 1995 to 2001.

Experiments he led were the basis for favorable recommendations on constructing NIF. Kilkenny has made major contributions to experimental ICF for more than 35 years. He has some 200 refereed publications on ICF.

Kilkenny has won the Teller Award from the American Nuclear Society, the American Physical Society (APS) Excellence in Plasma Physics Award, the SPIE Conrady Prize, and the Fusion Power Associates Leadership Award. He is a Fellow of the APS.

Kilkenny was an academic at Imperial College, London, where he researched non-linear thermal transport, hydrodynamic instabilities, plasma spectroscopy and implosions.