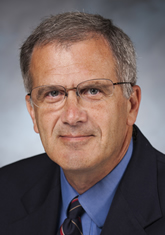 Peter J. K. (Jeff) Wisoff is the principal associate director of NIF and Photon Science at Lawrence Livermore National Laboratory (LLNL). He is responsible for ensuring the safe operation of NIF as a world-class user facility in support of the National Nuclear Security Administration (NNSA)’s Stockpile Stewardship mission; partnering with other LLNL capabilities to establish leadership in Stockpile Stewardship science associated with inertial confinement fusion and high energy density physics; overseeing the development of advanced laser systems, related optical and target systems, control systems and systems engineering capability for research, commercial and government agencies; and maintaining close partnerships with the Department of Energy/NNSA, other government agencies, academia and private industry.

Wisoff came to LLNL in the fall of 2001 as a deputy associate project manager for systems engineering at NIF. In 2003, he became the associate project manager for small optical systems on NIF, which included responsibility for the front end of the laser and laser diagnostics. Prior to assuming the role of principal associate director, he served as acting principal associate director and as the principal deputy, managing the Directorate Operations Team, which provides facility, information technology, environment, safety and health, security, and administrative services to the directorate.

Previously, Wisoff was on the faculty of the Electrical and Computer Engineering Department at Rice University. Selected as an astronaut by NASA in January 1990, Wisoff is a veteran of four space shuttle flights. He conducted three spacewalks totaling almost 20 hours that included testing tools for the first Hubble Telescope repair mission, construction of the International Space Station, and the test flight of an astronaut jet pack. He has received many honors with NASA, including the NASA Distinguished Service Medal (2001) and four NASA Space Flight Medals (2000, 1997, 1994, and 1993).

Wisoff earned his B.S. at the University of Virginia and his M.S. and Ph.D. at Stanford, where he worked on the development of short wavelength lasers as a National Science Foundation graduate fellow.