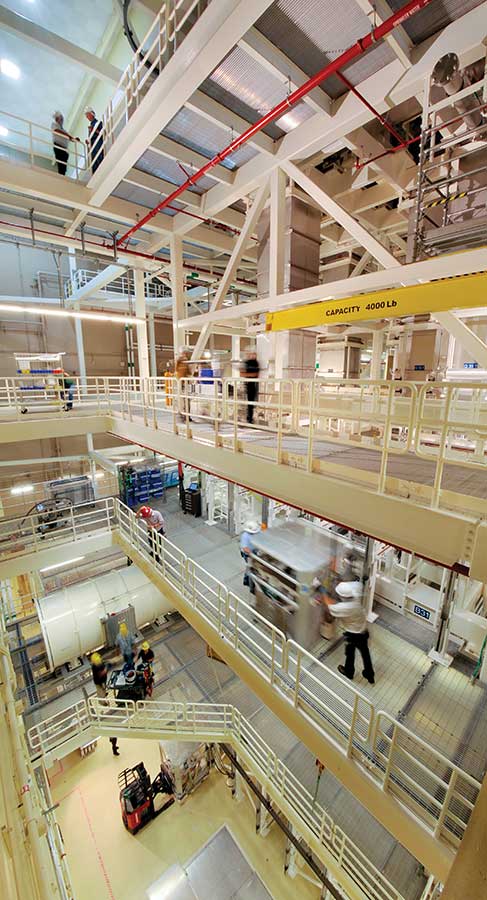 Within the laser beam enclosures are two stages of spatial filters that condition the beams after amplification. As NIF's laser beams are propagated four times through the main amplifier and twice through the power amplifier—boosting their energy to about four megajoules of infrared laser light—and just before the beams are sent to the target chamber, each beam is focused through a series of tiny, millimeter-sized pinholes in NIF's spatial filters. These pinholes are located at the center of the huge beam tubes that create a vacuum environment so that the laser beams can be concentrated into such a small spot size. Passing the beams through the pinholes eliminates stray laser light, creating high-quality beams capable of meeting their stringent performance requirements.

The beams travel through the switchyard in groups of four, or "quads." Twenty-four beam quads are redirected to the upper portion of the target chamber and the same number are redirected to the bottom portion. Four mirrors are required to accomplish this, along with a fifth mirror for one-third of the beams because of geometric constraints. The mirrors receive special coatings and subsequent conditioning that enables them to survive NIF's high-energy laser environment. All of NIF's transport mirrors have been designed to be extremely stable in the vibration and thermal environment of the huge NIF facility. This is critically important to be able to hit the target with a precision of better than 50 microns—about the thickness of a piece of paper.