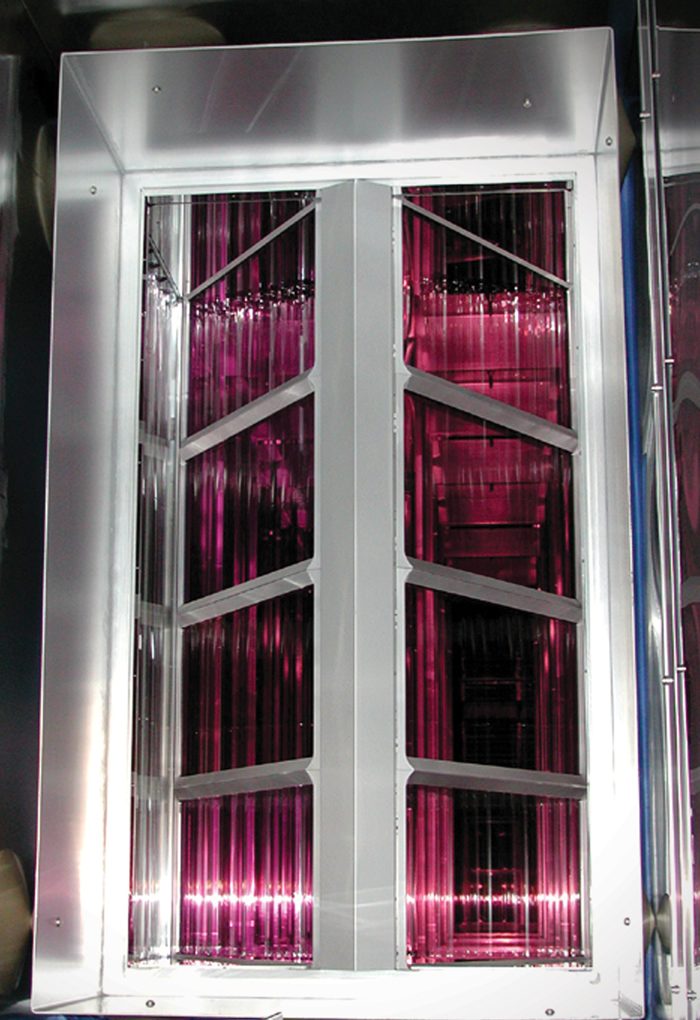 Each of NIF’s 192 beamlines contains two large amplifier sections, the main amplifier and the power amplifier. The amplifiers are designed to efficiently provide 99.99 percent of NIF’s power and energy. The amplifiers vastly augment the weak one-joule input pulse sent from the injection laser system while also controlling the beam’s spatial, spectral, and temporal characteristics. When fully integrated with laser amplifier glass, flashlamps, pulsed power, and other related components, the amplifiers are largest of NIF’s integrated systems, occupying approximately one-fourth of the facility’ floor space.

NIF’s amplifiers use 3,072 42-kilogram neodymium-doped phosphate glass slabs (16 glass slabs per beam). Each measures 3.4 by 46 by 81 centimeters and is set on edge at a specific angle, known as Brewster’s angle, so that the laser beams have very low reflective losses while passing through the glass. The glass slabs are “doped” with neodymium atoms, which impart a pinkish color to the glass.

When the slabs are bathed in the intense white light of the flashlamps that surround them, the neodymium atoms are raised to higher energy states (see How Lasers Work). When a low-energy laser pulse from the injection laser system passes through the slabs, the neodymium atoms release their extra energy into the laser pulse in the form of photons, increasing the pulse’s brightness. The neodymium-doped phosphate laser glass is the result of a six-year joint research and development program with industrial partners SCHOTT North America and Hoya Corp. USA. This effort developed a revolutionary process for manufacturing meter-size slabs of laser glass that is 10 times faster, five times cheaper, and with better optical quality

The amplifier slabs are surrounded by vertical arrays of flashlamps. Measuring nearly 180 centimeters (six feet) tall, NIF’s 7,680 flashlamps are the largest commercial units ever made. When driven with about 50,000 joules of electrical energy, the flashlamps excite the neodymium in the glass slabs to provide optical gain at the 1,053-nanometer (infrared) wavelength, also referred to as “one omega” or 1ω light. The flashlamps are cooled with nitrogen gas between shots to indirectly cool the amplifier slabs and reduce beam distortions in order to meet the operational requirement of one shot every eight hours.

Assembled and tested amplifier and flashlamp modules are loaded into controlled-environment canisters before being transported to the laser bays. The canisters are mounted on special automated guide vehicles and moved to the beampath. The transporters position the canisters, docking them to a tolerance of one millimeter and one-tenth of a degree rotation. The transporters also carry their own utilities, including compressed air, vacuum system, and “clean air” gas.